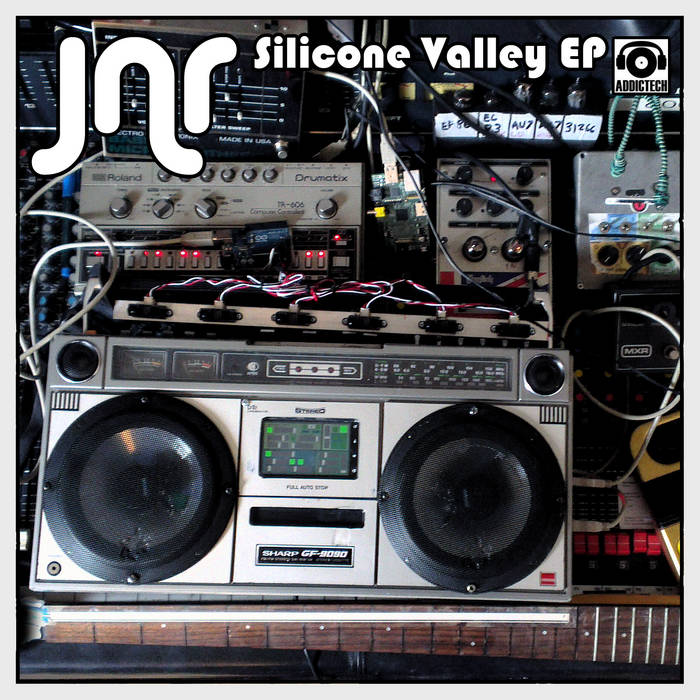 For the highest percentage to go to the artist, please consider purchasing this release from the Addictech.com store directly. -> www.addictech.com/p/133412

Addictech is both humbled and ecstatic to release the Silicone Valley EP, the latest from perennial favorite electro bass warper Jnr Hacksaw. Known to his friends as Alexis Cousins, the ever inventive circuit bending knob twiddler has covered a lot of terrain in his 15 odd years in the scene. His work has thoroughly and playfully explored the nexus between the arts and sciences, blanketed by accessibility despite its inherent complexity. He has created a synth modeling Android app, a generative composition program, a soft, interactive music and color object, an animatronic installation that had ten-metre long actuating tentacles wiggling out of a building, and, as if that wasn't enough, a full-scale inflatable whale for the 2012 Summer Paralympic Games.

As you would expect, Cousins's musical output has been varied, as seen in the steadily released stream of singles he's issued under the Jnr Hacksaw nom de plume since 2005. Starting off in the early '90s on a goa-trance kick, his Jnr Hacksaw moniker has gone on to birth new beats in the genres of breaks, big beat, and psydub for labels such as SubAtomik and Trigger.

Style wise, "Silicone Valley" is fairly consistent, all containing the quirky big bass sound between 100-110 BPM that Cousins has cultivated as of late. Yet, it remains astounding how far an artist of this calibre can take listeners with just three tracks, spanning fifteen minutes. "Fuxstix" has all the glitchy trickslaid over a bouncy breakbeat. "Kernel Sandoz" has a more menacing beat and moaning sub-bass, while the improvised interplay in the higher frequencies stays a little more elusive. "Pentaphonik" brings the EP home on a sci-fi note, with a slightly sluggish beat resisting the dubstep urge in lieu of a more boom-bap psychedelic strut.

Cousins developed three new controllers and new software for the Silicone Valley EP, which clearly expand the vastness of the journey on which these tracks take you. While the style of the tracks fits within the boundaries of a topnotch mainstage IDM mix, the distinct personality imbued by the use of the newly created RPiHarp (a 6 beam proximity sensor instrument running on a Raspberry PI microcomputer, with five Karplus-Strong string models and a bandpass filter), the Acid Theremin (a dual proximity sensor with a note-stealing step sequencer, with sounds similar to a 303), and the Fuckstick III (a long ribbon controller with midi clock and scale quantizing) helps the EP realize the imaginations of both the dance floor devotee and the studio nerd.

Funky, low, and everything we wanted from Jnr! Check it out!