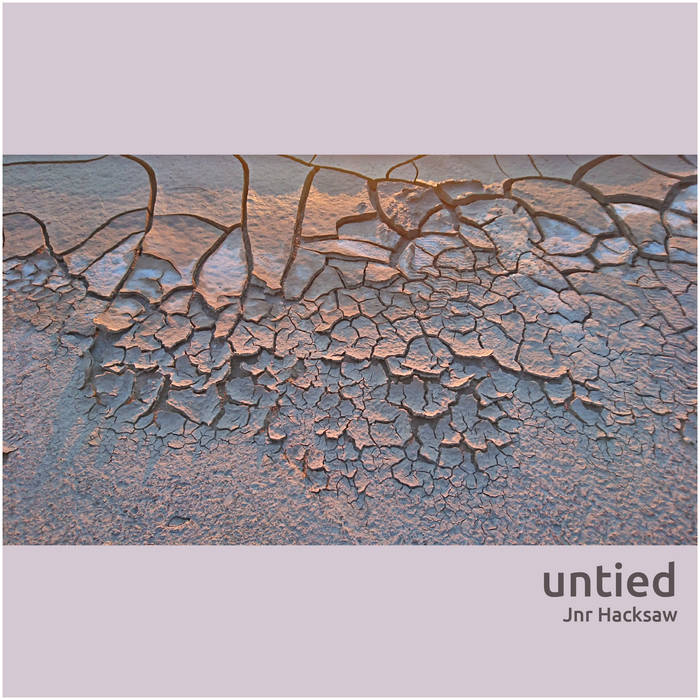 Hacksaw is backsaw! It's been a while since we were last treated to a mini-collection of Jnr Hacksaw treats sourced from the electro-breakbeat glitch mines. After hitting us with the circuit bent bass glee of Silicon Valley EP in 2013, he pretty much dropped off the map. Apparently, he spent several years coding, creating a performance sequencer that allows him to improvise sophisticated, micro-edited music without so much as a save function on which to rely. With this in mind, the 28-minute-long Untied release delivers four fresh takes on the form, tracks that sound so fresh you'd think they were being improvised for you as you hear them.

The opening "Thirteen Ten" is funkier than a sideways Spoonbill, tapping a new vein of glitchjazztronica with its angular, off-kilter percussion creating the base for a mid-range synth lead jam somewhere between Miles Davis and Aphex Twin. "Dirty Process" keeps the tempo down to focus on its cybernetic atmosphere, sounds diced and reduced to buzzing fragments that pan around your headphones like freaky flies while pulsing beats tumble around the lower frequencies. "Vanillier" comes on hauntingly with vocals distorted beyond recognition, giving way to the kind of Tipper-esque funky breakbeat and rippling synth warbles tweaking an isolated melody that should land it on a main stage somewhere. "Eighteenf" rounds out with a return to head-wobbling downtempo, reforging the jazzy elements of "Thirteen Ten" into even trippier hops.

Throughout Untied, Jnr Hacksaw sounds truly and deeply inspired, which in turn ignites the passions and possibilities within all of our minds. Outside of headphones, where the listening experience is practically ecstatic, this is one release to take to a quirky chill stage or to score a dark technoir film set in an alternate '80s universe or whatever such instance you imagine. Free your sequencer and your mind will follow.