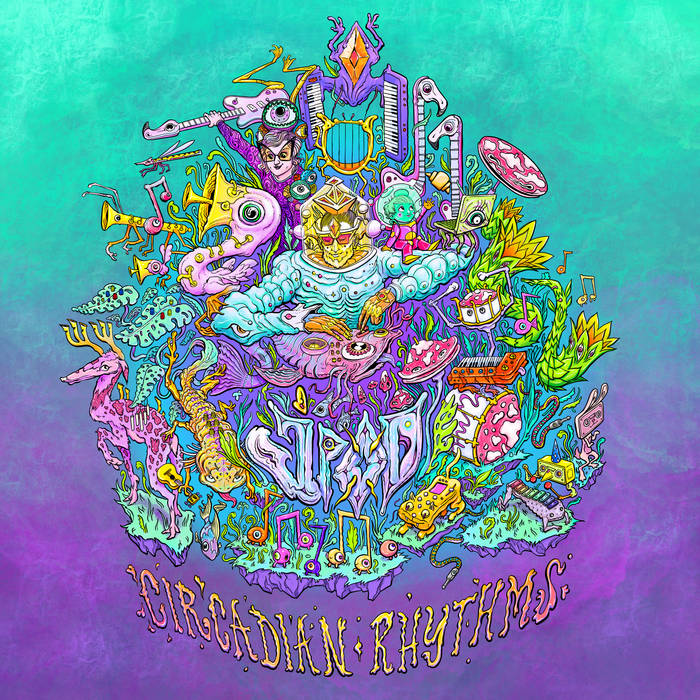 A circadian rhythm is a day in the life of all earthlings, the predictable fluctuations of our physical, behavioral and/or mental states over the course of a roughly 24-hour period as influenced by sunlight and temperature. With this concept as the title of JPOD's second full-length, one can see the clear yin-yang to this album, all of the acoustic instrumentation blending in so organically with digital sound craft that the seams are practically invisible, swirls of black and white in balance.

"To the Light" takes you up, with its emotive vocal lines and strummed guitars effervescently supporting a slick downtempo beat, gliding directly into "Midnight Oil," with its fat brass, echoed piano, and staccato vocal snippets lending it a touch of darkness. Later on, tracks like "Moonlit" and "Till Dawn" also seem to interpret the album title, but the theme isn't so rigidly literal as it is interpretively implied. Circadian Rhythms is not an album drowning in messages so much as it creates a feeling, a sense of rounding into form and being in the pocket, of hitting one's proverbial peak and aging gracefully.

JPOD's debut full-length Halfsteppin strutted out confidently in 2012, but a lot of life has been lived since then. In many ways, he is the same old beat chef we always knew, a staple at Bass Coast and Shambhala, frequent collaborator with Stickybuds as the StickyPod Connection, and ace producer of the tastiest womp gland-tickling bass music. Yet, he has clearly matured, both as a producer and as a young parent. Circadian Rhythms continues the trajectory outlined on his Taking a Deep Breath EP from 2014, a move towards more sophisticated song-writing and polished production, incorporating his worldly backpacker influences and peak time main stage aesthetic into a style that reflects the total sum of his age and experience. As such, his sophomore album pulses with a fatherly feeling of deep caring and quiet strength.

From his turntablist origins to his mastery of Ableton, the progress charted in the seven years between albums is obvious. Where he was once consistently over-the-top in quirky glitch-hop funk, JPOD now demonstrates unimaginable depth in stunning subtlety, with fifteen mid-tempo jams that feel lovingly nurtured rather than slightly imposed. Make no mistake, he still brings the party, but he hits you in the feels too, delivering as much in the way of mood-drenched meditations for headphones as rib rumblers for the twilight hours. Although that Spoonbill-esque good natured, trip tweaked, mutant funktronica freak fest style is still apparent on "Right Now," Circadian Rhythms generally relaxes into a warm vibe that is all JPOD's own.

Suffice to say, there ain't no halfsteppin' on this album. Circadian Rhythms is a long, confident stride towards ultimate perfection. Enjoy the trip!

Even though this release is available at over 300 outlets, we encourage you to purchase from the addic.tech store. We are very generous to our artists, and by purchasing from this site you support them directly with no middleman!